“A new achievement confirms the role of our Human capital and its ability to compete regionally and globally”, Al-Saeid, MD and GM, ITS Group

The International Turnkey Systems Group (ITS) has realized a new regional achievement by obtaining the “Best Technology Company of the Year 2012” award from Arabian Business Magazine. This award was presented in recognition of ITS’s recent achievements in the field of information, software development and technology.

​Mr. Khaled Faraj Al-Saeid, Managing Director and General Manager of the ITS Group, received the award at a prestigious ceremony in the State of Kuwait. Mr Al-Saeid commented on being selected for this award by saying: “Once again ITS confirms its superiority by the testimony of others through obtaining one of the top regional awards and is highly recognized by companies and institutions in various sectors”.

He added: “For more than 30 years (the lifetime of the company) our Human Resources have played the most prominent and important role in realizing these achievements and have positioned the company to enable it to compete strongly within the market and most importantly to distinguish it through groups of solutions, products and services which have ultimately become the hallmark of ITS”. 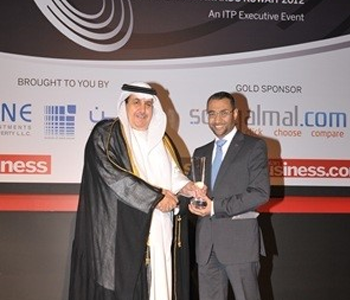