“A new achievement confirms the role of our Human capital and its ability to compete regionally and globally”, Al-Amiri, Assistant General Manager, ITS.

The International Turnkey Systems Group (ITS) has realized a new regional achievement by obtaining the “Best Technology Provider of the Year” award from Islamic Business and Finance Award (CPI Financial publishing). This award was presented in recognition of ITS for providing the latest technological solutions and services that would meet banks present and future needs. ITS solutions also enabled Islamic Banks to face growing challenges of competition in the local and regional financial markets.

​​​ITS has  provide the Banks with a number of ETHIX main banking services and solutions, including Islamic banking, automation of branches management, online banking services, and technological services related to treasury and management of Islamic investments and documentary credits.

Mr. Khaled Jasim Al Amiri, Assistant General Manager of the ITS, received the award at a prestigious ceremony at Emirates Towers Hotel, Dubai. Mr Al-Amiri commented on being selected for this award by saying: “Once again ITS confirms its superiority by the testimony of others through obtaining one of the top regional awards and is highly recognized by companies and institutions in various sectors”.

Speaking to reporters on the sidelines of the ITS Annual Celebration, Al-Saeid said that the past year was another year of achievements. He noted the growth in net and operational profits, especially as a result of the sale of TABS billing products to one of the world’s largest telecommunication companies – Huawei of China.

“It is a source of pride for an Arab company like ITS to have succeeded in attracting the attention of one of the largest international companies and to then sell it one of its products,” he said. This deal in particular is an important milestone in the company’s long history.

“This deal brings us to the rank of leading world players in the telecommunications sector, along side international companies that seek to cooperate with us and engage with our products and solutions. We are proud to be the first and only Arab company that has been able to go global in this area,” he added.

Al-Saeid attributed the success of ITS and its prominent status to its wealth of human resources which developed many products and solutions of high quality and worked to enhance them over the past three decades. This, he said, has made ITS a competitor in its sector and has placed it under the spotlight.

​He added: “For more than 30 years (the lifetime of the company) our Human Resources have played the most prominent and important role in realizing these achievements and have positioned the company to enable it to compete strongly within the market and most importantly to distinguish it through groups of solutions, products and services which have ultimately become the hallmark of ITS”.

Also, On 10th October’ 2011 ITS has been awarded by The Arabian Business awards as “Systems Integrator of the year” granted to various business sectors are considered as some of the most notable and important awards which are presented to the business sector in the region.
Banking and Investment Sector

The ITS ETHIX financial solution is a recognized solution in meeting the requirements of Islamic and traditional banking and Islamic finance. ETHIX has assisted many banks and financial institutions to minimize their operational costs in responding to the increased demand of customers for both traditional and Islamic products and services.
In addition, through the use of the most advanced and developed technological solutions in the world, ETHIX Financial solutions is ranked globally as the premier total banking solution, fully compliant with Islamic Shari’a catering to Tier1 banks.

The successful strategy of the ITS Group has enabled the company to double the ceiling of its returns and achieve significant company growth. By increasing total returns and the company’s equivalent in profits, ITS have been able to make both regional and strategic expansions, highlighting the role of HR in ITS. 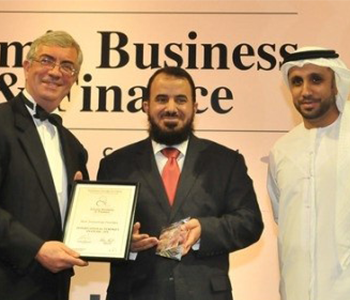