For the 31st year, ITS celebrates achievements & record profits for 2011

Managing Director and General Manager of International Turnkey Systems Group (ITS), Mr. Khaled Faraj Al-Saeid, said that the company’s celebration of achievements for the 31st year affirms its success in spite of regional developments in recent years, namely as a consequence of the global economic crisis.

​​Speaking to reporters on the sidelines of the ITS Annual Celebration, Al-Saeid said that the past year was another year of achievements. He noted the growth in net and operational profits, especially as a result of the sale of TABS billing products to one of the world’s largest telecommunication companies – Huawei of China.

“It is a source of pride for an Arab company like ITS to have succeeded in attracting the attention of one of the largest international companies and to then sell it one of its products,” he said. This deal in particular is an important milestone in the company’s long history.

“This deal brings us to the rank of leading world players in the telecommunications sector, along side international companies that seek to cooperate with us and engage with our products and solutions. We are proud to be the first and only Arab company that has been able to go global in this area,” he added.

Al-Saeid attributed the success of ITS and its prominent status to its wealth of human resources which developed many products and solutions of high quality and worked to enhance them over the past three decades. This, he said, has made ITS a competitor in its sector and has placed it under the spotlight.

​Moreover, he said that the billing product and other services that were sold to Huawei are only part of the company’s many products of international caliber.

The company has more than 220 main clients, including banks, financial institutions and Ivy League universities in the region, he said. The ETHIXS solution for Islamic banks and institutions is considered the best in this area, alongside the ONE CAMPUS solution which contributed to the development of the educational process in the Arab world

Al-Saeid noted that this is the 31st anniversary of the establishment of ITS, marking a new era in the company’s long history rooted in principles that make it the IT company of greatest power and “the region’s largest professional company specializing in IT.”

He also said that focus in the upcoming period will be on the Arab region from the geographic perspective, which special emphasis on the higher education and Islamic financial institutions as the main sectors that ITS will target. The company will work to develop services, products and solutions for these two sectors, alongside others.

ITS will also continue to focus on its human resources out of its belief that this is the secret to the company’s success in the past period. It will also be enhancing its efforts with its clients so that they are not only satisfied with the products and services of ITS, but also enthusiastic about its successes.

** Global Competition in the Region **

In response to a question about global competition in the region, Al-Saeid said that ITS is ready to take on global competition in the Arab region. He said that the company’s solutions, products and services give it a competitive edge because while boasting international standards, they take into account the requirements and needs of the Arab region, whether institutions or individuals.

“We have been present in the region for more than 30 years, and our experience in dealing with the region makes us better able to understand the needs of Arab companies and institutions,” he said.

** Political Developments in the Region **

Asked about the impact of the ‘Arab Spring’ on the company’s activities, Al-Saeid said that ITS only felt a slight impact of the changes in some of the Arab countries such as Egypt, Yemen and Libya, especially as these are considered important markets for the company.

“We are optimistic about these developments, and we believe that the upcoming period will be better for us because we are able to work in these countries and to provide our expertise to support different economic sectors, which will ultimately be of benefit to the people,” he said.

As for the company’s activities outside the Arab region, Al-Saeid said that ITS will continue to provide its services outside the region indirectly through its partners in these companies.

On the State Development Plan and the importance of IT in its implementation, Al-Saeid said that one cannot talk about development without placing IT as a main axis, as it is the fastest and most efficient means to cut down effort and time, while making progress. He added that in today’s world, the IT industry has become much like the air and water that sustains any society.

In terms of the fast-paced development of the IT sector, making services cheaper and reducing revenue, Al-Saeid said that although this is true, one must take into account that even with the reduction of the prices of IT products, demand continues to increase. This creates a balance which ultimately leads to an increase in net or operational profit. 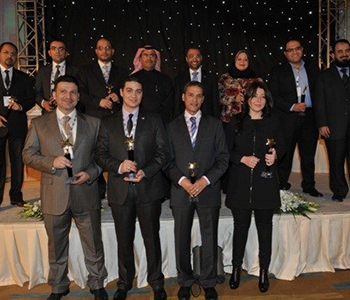