The International Turnkey Systems Group (ITS) will be organizing, in cooperation with NoufEXPO, the Smart Kuwait conference on March 8, 2016 in Aljahra Hall at JW Marriott Kuwait. The Conference will be under the patronage of His Highness the Prime Minister Sheikh Jaber Al-Mubarak Al-Hamad Al-Sabah who will be represented by the Minister of Commerce and Industry Dr Youssef Mohammad Al-Ali. Commenting on this occasion Fahd Al-Rashdan, the ITS Executive Manager for Strategy said: “ The patronage of His Highness the Prime Minister of the Smart Kuwait conference represents a governmental and official support for an advanced and revived futuristic outlook for the State of Kuwait where modern technology plays the role of driver and motivator of growth and economic diversity as well as the nurturing of productive and efficient individuals who are capable of integrating with the world. This kind patronage also represents support for the private sector initiatives to carry out what it deems as its national duty in shouldering its responsibilities. ITS views the patronage of His Highness as a call for the exertion of greater effort.”
​Information community Rashdan added that “Smart Kuwait was a process aiming at developing the information community in Kuwait. It seeks to develop various services and life styles in the state and society through being the medium for putting the State of Kuwait on the map of the developed world and to contribute proactively to its progress, growth and prosperity. This is not to underestimate the efforts in many areas to support the development of the egovernment programs and the communication services in the State of Kuwait, but to stress that our efforts are directed to supporting the policies of the state in this respect based on the  profound experiences we accumulated at ITS over more than 35 years of progress and prosperity, and what we canoffer in cooperation with our strategic partners in terms of experiences in developing smart cities systems in countries and cities around the world. We should not overlook the unprecedented pace of technological developments as can be seen in such phenomena as that of the Internet of Things (IoT) which opens up several  undreamt of opportunities in the areas of education, health, industry, economy  and services. The challenge today is not in setting up rigid plans to realize, but in developing effective ways to keep the plans alive and responsive to all that is new.”Necessary experience As for what ITS can offer in support of the smart cities plans, Rashdan said: “ The company possesses the necessary experience in advanced information technology through its presence in most Middle Eastern countries over many years,  as well as the presence of its customers in many Asian and African countries. The company’s expertise is combined with the huge potentials of its strategic partners such as Microsoft, EMC and ESRI with each presenting a working paper to the conference about their vision and contributions in applying the initiatives of smart cities around the world. We also have the participation of the Public Authority for Civil Information to discuss the reality and ambitions of smart cities in the State of Kuwait. We, at ITS, believe that the process of smart cities leading up to smart Kuwait can only be the result of honest effort integrating the efforts of the governmental agencies represented by the Central Agency for Information Technology,  the Telecommunications Regulatory Authority,  information technology and governmental information centers with the local and international technology companies.” In conclusion, Rashdan said: “I must express my happiness with this joint effort with the conference organizing company, NoufEXPO, which provides effective contribution in the technological development of the State of Kuwait through the several forums and conferences it organizes, such as the EGov Forum. I am confident that our cooperation will continue in the future for the good of Kuwait and its progress.” 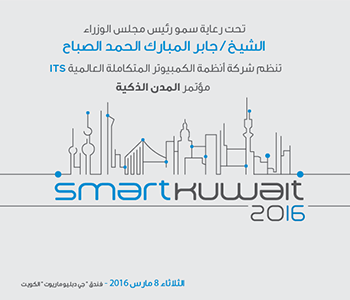