….The product demo that was provided by ITS team during the event earned the approbation of many of the event attendees.

Over the past years, ITS has been a keen participant in the Com World event series which provide the opportunity to closely feel the pulse of the telecom market at different parts of the world. This Year, ITS got up, close, and personal with some of the major telecommunication service providers in Africa at the West and Central Africa Com which was held in Dakar, Senegal between 16-17 June 2010.

The past few years have seen closer focus on enhanced dealer relationship management, particularly in the African market where there is an increasing reliance on distribution networks to achieve the necessary competitive advantage. In the event, ITS showcased the new and improved release of TABS Dealer Relationship Management System (TABS DRM) with its new features such as compliance and query Management, and advanced fraud management.

​The product demo that was provided by ITS team during the event earned the approbation of many of the event attendees.

This year’s West & Central Africa Com was attended by over 700 market leaders ranging from major telecom operators, ministries, mobile, fixed, satellite and WiMAX operators, ISPs, MVNOs, solutions and technology providers, investors and consultants in all of the region’s most important markets. The event featured speeches from 50+ visionary speakers including 25 CEO level operators. 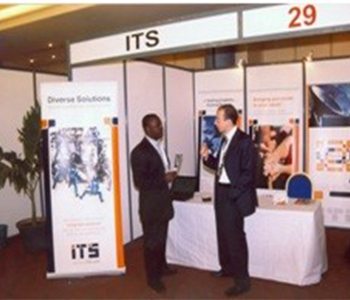